Beatrice Glow: Once the Smoke Clears at the Baltimore Museum of Art

Brooklyn-based artist Beatrice Glow’s solo exhibition, Once the Smoke Clears, at the Baltimore Museum of Art is a riveting, multi-sensory collection of works exploring the social history of tobacco. An overall somber and contemplative atmosphere hangs over the exhibition with its dark gray walls, and a faintly smokey smell that can be sensed as one passes through the space. Glow is a multidisciplinary artist whose work ranges from watercolor, to VR-sculpted and 3D-printed objects, to printed and embroidered fabrics, and she grounds the research for this exhibition on Maryland’s history within the network of the global tobacco trade. She employs the language of decadence to uncover the true cost of luxury items and the ramifications of the forgotten history of the tobacco plant. Alluring in their intricate details, vivid colors, and natural imagery, the work in this exhibition is deceptive on closer inspection, as human suffering becomes visible.

The literal translation of the Chinese word for tobacco is “golden silk smoke,” which becomes a visual motif throughout the show. The artist was inspired by historic objects from the museum’s collection, particularly the “Golden Silk Smoke” series, recalling historical snuff bottles and boxes, which are modeled in VR and 3D-printed from PLA with intricate detail. One of them, about 2 inches tall, has a purple base with silver decorations on the outside, reminiscent of smoke and the tobacco flower, reflecting both Chinese and European snuff bottles and boxes that became popular after tobacco was introduced to these parts of the world in the 16th century.

Presented alongside Glow’s objects are original European and Chinese designs and status symbols constructed from gold, marble, and enamel. Jean Francois-Balzac’s “Round Snuff Box” from 1750 is a small treasure, made with gold and enamel. Its imagery of blue angels over the gold surface surrounded by flowers is luxurious, but rather less angelic when we consider the larger human implication of the tobacco trade.

After the plant’s infusion into the global trade system, its popularity grew exponentially, increasing the need for cultivation. The state of Maryland’s formation and growth can be accredited to tobacco cultivation. Since its farming is labor intensive, this uptick in demand also meant a need for larger slave populations. Simultaneously, plantation owners kept pushing Native American tribes off their land. In Maryland, the Accohannock, Assateaque, Choptank, Delaware, Matapeake, Nanticoke, Piscataway, Pocomoke, and Shawnee tribes were forcibly displaced as Europeans acquired more land, and thus, the decadence of these seemingly small consumer objects drastically contrasts with the amount of human suffering they caused and forever changed the makeup of the environmental landscape.

Other 3D printed sculptures feel like they are masquerading as historical artifacts by mimicking styles and textures, but upon closer inspection, the imagery is bizarre. “Digital Smoke Signal (Vape pen with cartridge and charger),” created from VR-sculpted photopolymer resin in a 3D print with metallic paints, enamel coating, and computer cord is exhibited in a vitrine-style cabinet that appears precious and aged with its blue and white enamel. Reminiscent of traditional Chinese ceramics, it is clearly from the 21st century, and  while vape pens are not status symbols like a snuff bottle, they allude to the changing uses and forms of this multifaceted plant. As one of the first crash crops, tobacco was foundational in the enrichment of white colonialist settlers. The tobacco trade still encompasses and affects the world: in 2021 the global tobacco market size was valued at $849.9 billion. By replicating yet modernizing historical objects, sometimes with satirical imagery, Glow ensures that the history of this plant is acknowledged. 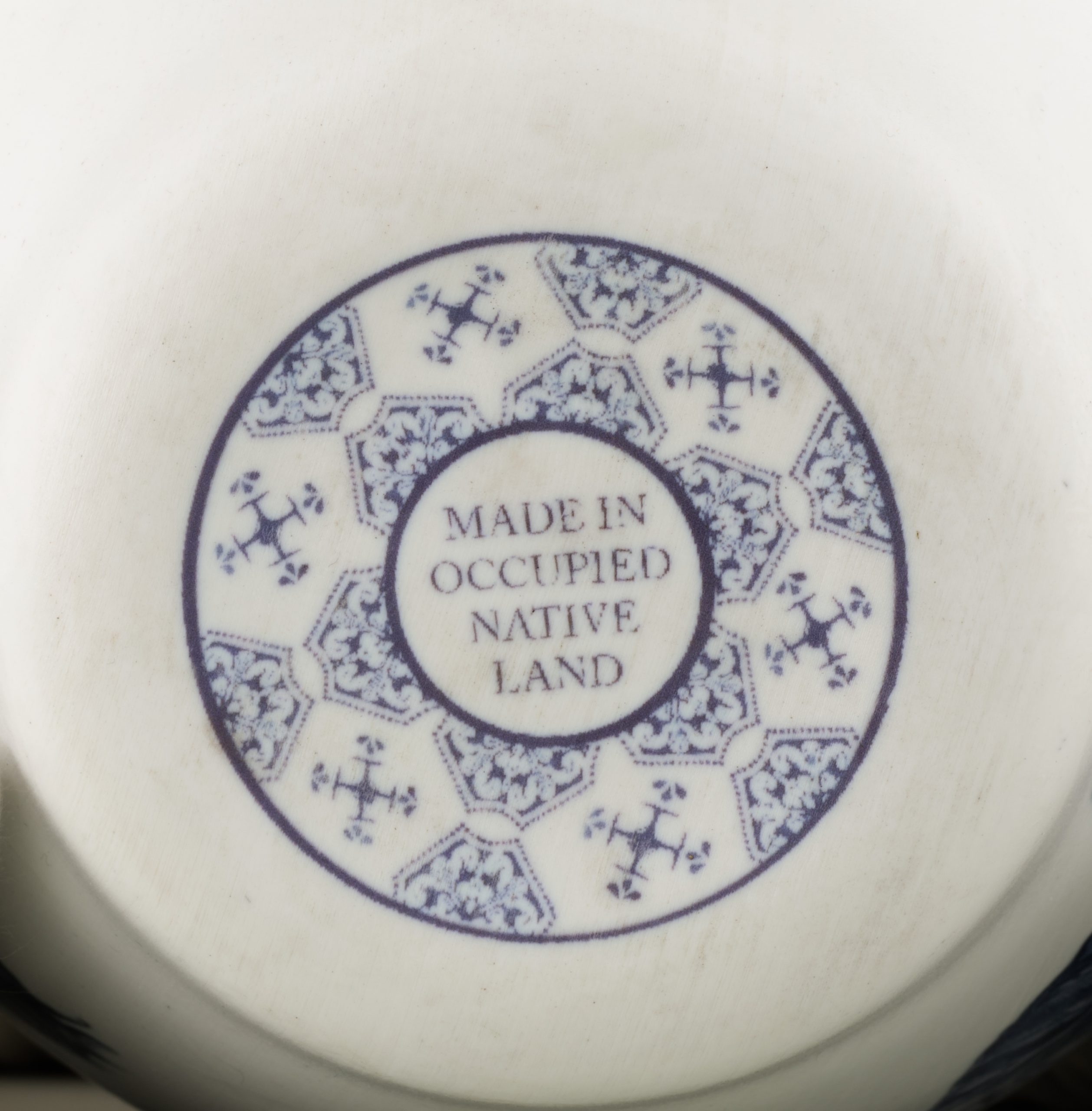 Brutal memories reach across time in “Colonial Desires,” an inkjet print on polyester yoryu, a light, sheer chiffon fabric, and embroidered with gold thread in a jarring visual contrast of leaves and chains. The fabric alludes to expensive scarves produced by luxury companies, yet instead of floral or abstract imagery, it portrays suffering. Black and white drawn imagery of settlers, hands probing and weighing, hookah smokers, tobacco containers, and plantations are combined, layered, and then printed onto the light delicate fabric. Ship imagery references the Baltimore neighborhood Canton—named for the mispronounced city of Guangdong in China— that was founded by John O’Donnell, an enslaver and tobacco plantation owner. Glow acquired the imagery from archival prints in which the representation of Asian and African figures is stereotyped, demonstrating the characteristic racial hierarchies of plantations. Tobacco’s economic boom enriched plantation owners and expanded colonies, but it also led to bloodshed, and its human toll is still felt today.

Yet, tobacco has a two-fold history, as many Indigenous peoples revered the plant as sacred and used it in medicinal and spiritual practices. Through her research, Glow consulted Indigenous researchers, including Dakota (Nakoda) scholar and beadworker Jessa Rae Growing Thunder, and included two pipe bags from the BMA’s collection made by an unidentified artist in the late 19th century. Each bag was constructed to hold a canupa, the Lakota term for the ceremonial pipe, and is made from a soft, beige leather with geometric, patterned beadwork and feathers, demonstrating the esteemed value that the Oceti Sakowin or Sioux culture places on tobacco. One bag features a bead pattern of triangular green shapes with red squares in them, which according to Growing Thunder could symbolize thunder clouds with hail. It feels crucial to include this sacred side of the plant, so it’s not completely tainted by atrocities.

The artist also delivers a sensory scent element to the show in the form of two small, scented cards. In “Golden Silk Smoke,” Glow includes hints of burning spices, while in “a song for mapacho,” she commemorates her first experience of Nicotiana rustica, a strain of tobacco native to Peru, by including a damp, earthy smell mixed with hints of the plant.

In a world of globalized trade, I wonder at the other consumer goods that have been and are created with exploited labor, with atrocious effects on the environment that go largely unseen. It reflects the BMA’s commitment to representing and discussing diverse current and past issues, working to rectify oppressive histories and to build a more equitable future through and for the arts. Through multiple sensory experiences, it presents a beautiful, surprising, and important historical narrative, capturing a horrendous history.

Beatrice Glow: Once the Smoke Clears continues through October 2, 2022, at the Baltimore Museum of Art. The show was curated by Sarah Cho, BMA Curatorial Assistant of American Painting & Sculpture and Decorative Arts, and Virginia Anderson, Curator of American Art.

Fanni Somogyi is a multi-disciplinary artist and writer living and working between Baltimore, MD and Budapest, Hungary. She holds a BFA from Maryland Institute College of Art. Her sculptural work explores cross pollinations, hybrid creatures and speculative scenarios, and she writes criticism, poetry, essay, and short fiction, with particular interest in the scientific and environmental. Her writing has been published in Bmore Art, Hobart Literary Magazine, and as part of the Supra Natural Anthology.