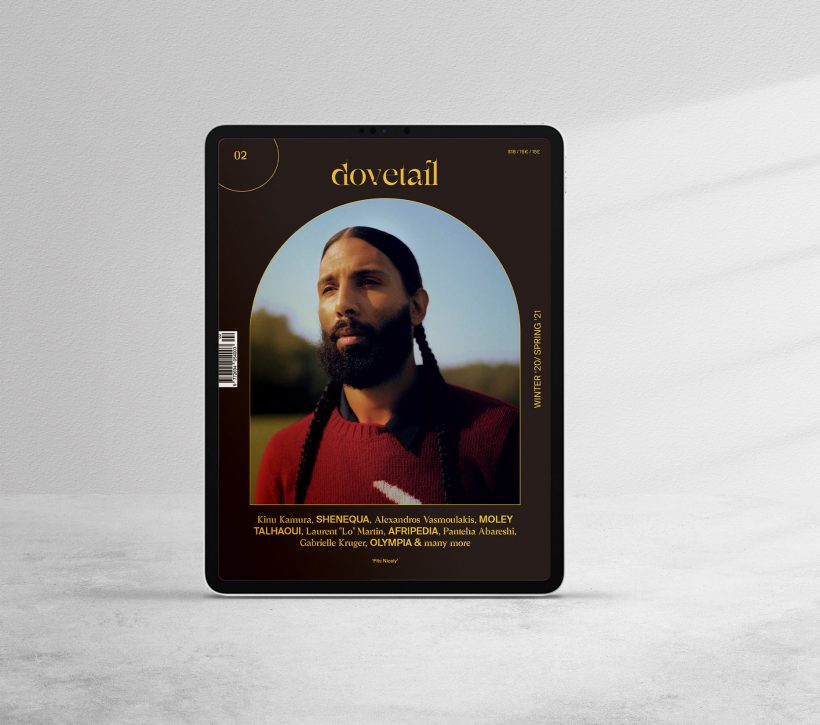 Welcome to Issue 02 of Dovetail, where we explore the art of wandering, of moving purposefully yet slowly. What does it mean to travel in a time when it is widely restricted? How is the spirit nourished? How has the artistic process adapted? Local rambles and afternoons spent in nature connect many of the artists in this issue back to their studio practices in ways they hadn’t considered prior to having to slow down. And in many ways, not only the work itself but the means of sharing it and what it means to connect with others through it, have begun to take new shapes.

In this issue, artists around the world take us on vicarious journeys as local travel guides: Max Freund in Vienna, Austria; Faatimah Mohamed-Luke in Cape Town, South Africa; Nadia Waheed in Austin, Texas; Rithika Pandey in the Outer Hebrides of Scotland; Cecilia Charlton in London, UK; Amber Cobb and Mario Zoots on an all-American “toadtrip;” and Isabella Cuglievan on the northern coast of Peru. In our cover feature, we meet with Stockholm-based painter Moley Talhaoui to gather among many of his closest friends on a cool Swedish autumn day–a rare experience in a world ravaged by a pandemic, which Sweden initially curbed early.

We visit Laurent “Lo” Martin’s studio in Catalonia through the lens of art director and photographer Tea Sirbiladze, resist touching the surfaces of all of Gabrielle Kruger’s painted confections in her Cape Town studio with Alix-Rose Cowie, make art history punk again with Paris-based artist Kinu Kamura’s “Cover” series that repositions the Western art history canon within contemporary pop culture, and discuss the nurturing of identity and processing of grief through weaving with Chicago-based artist SHENEQUA.

With artist Panteha Abareshi, we explore what it means when art spaces are ableist and why right now, in some ways, art may be more accessible than it’s ever been. We scale time and space with Alexandros Vasmoulakis, whose previous life as an illustrator and muralist still influences his work today. Gallery founder Ali Rossi tells us about New York City-based OLYMPIA, an initiative that until just recently operated out of the organizer’s apartment and online, and focuses on womxn artists.